Each year companies use Pride to drive up profits in the name of LGBTQ+ people — yet our analysis tracks dozens of the same corporations funding anti-LGBTQ+ legislation across the country.

Read the DFP press release below and see the full project here.

A majority of likely voters report that knowing about these donations would galvanize action against corporations who donate to anti-LGBTQ+ lawmakers — including AT&T, Blue Cross Blue Shield, Disney, Home Depot, Lowe’s, Sprint, State Farm, and Walgreens.

Voter approval of national corporations who have donated to anti-LGBTQ+ lawmakers takes a significant hit when voters are told information about their donations. For example, while more than 80% of voters initially have a favorable view of Lowe’s, Walgreens, and Home Depot, less than half of voters hold the same opinion of the companies when informed of their contributions. 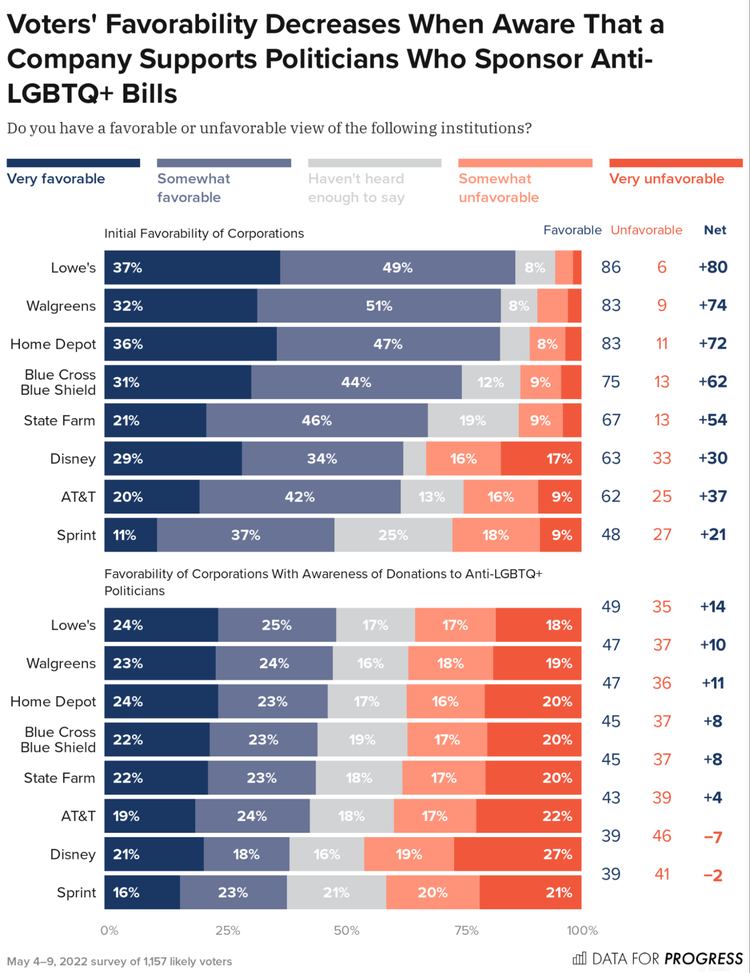 Data for Progress finds national likely voters say they will take the following actions against these corporations once they hear about these funding ties:

“The LGBTQ+ community is under assault from far right extremists, and we need our allies to step up,” said report co-author and Data For Progress Fellow Erik Mebust. “Corporations funding these anti-LGBTQ+ politicians have an opportunity to send a message that these attacks are unacceptable by cutting off their financial support. Those that do will march at Pride having done the work of true allies—and those that don’t should be held accountable.”

“Whether they’re being duplicitous or just careless, corporations shouldn’t be allowed to play both sides unchecked,” said report co-author Rachael Salisbury, Vice President of Nesbitt & Parrinello Research. “Most people don’t have the time to sift through hundreds of pages of campaign finance disclosures, but activists and consumers deserve to know when corporations aren’t true to their word. This tool is the first step to holding them accountable.”

About Data for Progress

Data for Progress is a progressive think tank and polling firm, which arms movements with data-driven tools to fight for a more equitable future. DFP provides polling, data-based messaging, and policy generation for the progressive movement, and advises campaigns and candidates with the tools they need to win. DFP polling is regularly cited by The New York Times, The Washington Post, and hundreds of other trusted news organizations.

Case Study: Winning the Fight for Our Planet

A list of Black political consultants for Democrats and progressive causes.

Apply to work with the Democratic Party or advocacy organizations and help us power progressive victories in 2021 and 2022 nationwide.